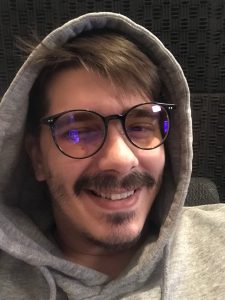 Slotmamba is a gambler since the tender age of 9. Still a kid at heart, always up for some silly fun, he’s energised and ready to go from the moment he wakes up until he goes to bed.

His nickname combines his two passions, as he’s particularly fond of slots, but he does consider sports betting to be the king of gambling and his love for the NBA is well-known.

He loves interacting with the community and bringing joy. He does proudly wear the hat of the party clown, as giving people joy is sort of his… fetish! If you are faint-hearted, or if you just wanna go for sleep, then Slotmamba isn’t your kind of streamer. If what you want is loud fun, an adrenaline rush, and some lough till you cry moments, then you’re in great hands. Visit our Twitch and Youtube channels for five live streams weekly.

We use cookies on our website to give you the most relevant experience by remembering your preferences and repeat visits. By clicking “Accept All”, you consent to the use of ALL the cookies. However, you may visit "Cookie Settings" to provide a controlled consent.
Cookie SettingsAccept All
Manage consent

This website uses cookies to improve your experience while you navigate through the website. Out of these, the cookies that are categorized as necessary are stored on your browser as they are essential for the working of basic functionalities of the website. We also use third-party cookies that help us analyze and understand how you use this website. These cookies will be stored in your browser only with your consent. You also have the option to opt-out of these cookies. But opting out of some of these cookies may affect your browsing experience.
Necessary Always Enabled
Necessary cookies are absolutely essential for the website to function properly. These cookies ensure basic functionalities and security features of the website, anonymously.
Functional
Functional cookies help to perform certain functionalities like sharing the content of the website on social media platforms, collect feedbacks, and other third-party features.
Performance
Performance cookies are used to understand and analyze the key performance indexes of the website which helps in delivering a better user experience for the visitors.
Analytics
Analytical cookies are used to understand how visitors interact with the website. These cookies help provide information on metrics the number of visitors, bounce rate, traffic source, etc.
Advertisement
Advertisement cookies are used to provide visitors with relevant ads and marketing campaigns. These cookies track visitors across websites and collect information to provide customized ads.
Others
Other uncategorized cookies are those that are being analyzed and have not been classified into a category as yet.
SAVE & ACCEPT